Sometimes the child is too young or developmentally incapable of communicating what has happened to their body.  Some children may not understand that what the perpetrator is doing to them is actually considered abuse.

The child may think they have done something to deserve the abuse. The perpetrator may have told the child it was their fault. There may have been gifts, favors, or special treatment that led them to think they were an active participant.

A perpetrator may threaten physical harm to a family member, friend, household pet, or the victim directly. A perpetrator can make a child feel that talking about the abuse would split up the family and make other family members upset.  They may also fear punishment from their parents for putting themselves in a risky situation.

Children, especially older ones, are often aware of the tangible consequences that would come if the abuser was no longer in their life or the life of the family. If the perpetrator is a source of income for the family, it could mean their family could suffer financially without them in their lives. There may be a fear of deportation if one or more members of the household are in the country illegally. Their future could suffer if the perpetrator is someone like a teacher, coach, or doctor who has promised them future success.

5. Belief in Protecting Others

The victim may think that subjecting themselves to abuse is their way of protecting a younger sibling or family member from that same treatment.

Some children are taught that the abuse is a normal part of their cultural or religious traditions. Their culture or religion may teach compliance to elders regardless of what the elders are saying or doing.

A belief may have been fostered that what happens in the family stays in the family. The perpetrator may have isolated the family to prevent the child from having outlets to tell about the abuse. Sometimes the child is taught, either explicitly or implicitly, to solve their own problems and not go to someone else for help.

If parents are uncomfortable about the topic or imply that sex is not “something we talk about here” – the child may be less likely to tell when someone behaves in a sexual manner with them.

Abuse is often not a one-time incident. The abuser will often take their time to build a relationship with the family and with the child and introduce behaviors bit by bit in an attempt to normalize the abuse as it progresses.

11. Fear of Not Being Believed

It is far more common for a child to deny that abuse ever occurred than to make up false allegations. It is not unusual for a child to tell an adult and not be believed which can prevent the child from feeling that they will be believed in the future.  It is important that we recognize it is not our job to determine if abuse has occurred. Instead, it is important to make a report anytime a child discloses abuse so that the professionals can investigate the case and the child can get the help that they need.

It is imperative that we err on the side of believing the child and making a report so that the professionals can do their jobs and the child can get any help that they need.

When disclosure does happen, it is often a process, not a single event. For example, an individual may first provide hints about an assault; if the response is supportive, then more information may be shared. Over time, they may fully disclose the details of the event(s). That being said, if a child starts to talk about their abuse, here are some things to keep in mind:

Click the arrow in the top right corner of the screenshot to share this video on social media or by copying and pasting the link! 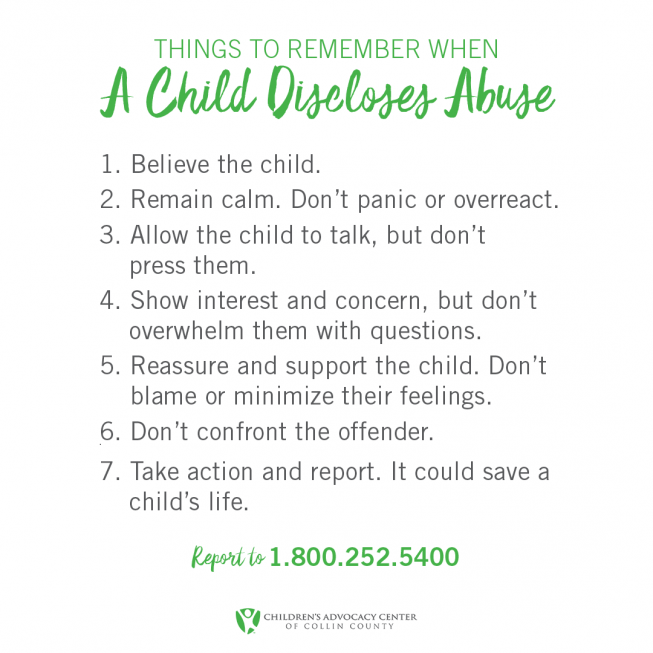